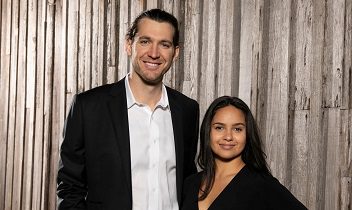 For this husband-and-wife team, working with a community bank opened up a world of opportunity.

Jon Dandridge grew up in the Northeast Florida community, and some of his earliest memories revolved around supporting a local small business that provided chiropractic services.

Jon was first exposed to chiropractic care at the age of 8, and became a regular patient around age 12 to maintain the health of his spine and nervous system. Throughout his youth, he found that maintenance care helped keep him healthy and able to perform at his best in competitive sports. Jon enjoyed a very successful career playing baseball at both the collegiate and professional levels. He attributes his success as an athlete, in large part, to the consistent chiropractic care he received.

“Now that I look back, I’m certain that I was able to have the career that I did partially because of that care I had throughout my life,” Jon recalled. “It helped maintain my body and prepare me to withstand the stresses of physical activity. It kept me healthy. That’s a big concern for athletes; with the wrong injury, you can end your career forever.”

After leaving the sport in 2011, Jon felt a void. He wanted a career that would allow him to serve others and connect with his community; he also wanted the flexibility to travel the world alongside his wife, Adelle, who immigrated to the United States from her home country of Brazil. “I played around with a number of ideas, and fell on chiropractic. It helped me when I was in sports, and if I could do that for someone else, that would make me feel fulfilled and happy,” Jon said.

While completing his education, Jon and Adelle went on a chiropractic mission trip with a small team of doctors from across the globe to provide care to people in need. During that trip, the couple experienced an awakening of a desire to give back on a global scale. They organized a mission trip to Brazil in December 2019, which was very successful as Jon and other chiropractors from around the world came together to help others. The couple knew they wanted the independence and flexibility to plan future events.

All of those goals came together with the opportunity to open an AlignLife® franchise.
Finding a local bank partner who understood their vision was a critical component to AlignLife®’s launch. Jon and Adelle wanted the support of a lender who could truly understand their vision, as well as their target market. Florida Capital Bank was their first choice; in addition to providing all of the services their new business would require, the bank’s leaders and employees shared a commitment to supporting the local community.

The couple worked with Florida Capital Bank to apply for an SBA loan, which helped them secure a space in a popular retail center in Jacksonville’s Julington Creek area. They launched the business in January 2020 by providing chiropractic services at nearby spas and gyms while their office was being built out.

Just as the construction process was nearing completion, the coronavirus pandemic began to spread in the United States — adding an unexpected twist to their grand opening plans. Instead of feeling afraid, the couple felt even more energized by the opportunity to use their business to connect like-minded individuals around a healthy lifestyle.

“We have this crazy idea that human beings are really strong and capable of living very healthy, vibrant lives and that this is actually our default state! Sickness and disease are NOT normal, expressing health IS normal,” Jon explained. “We want to gather around as many people as possible who want to live empowered lives, and celebrate that.”

While the couple could not have predicted that their business would debut against the backdrop of a global pandemic, they were confident knowing that their banking partner was close enough to consult in person (at a safe distance, of course) or over the phone to provide advice, answer questions, and keep their financial affairs on track.

“Everyone should consider a community bank,” Jon advised. “Think of your lending institution as a resource. Community banks are not going to just bring you in, make the transaction and throw you out the back door; they’re able to help guide you. They helped us understand how simple the lending process can be. That’s the key for every entrepreneur: to feel like your dream is actually doable.”